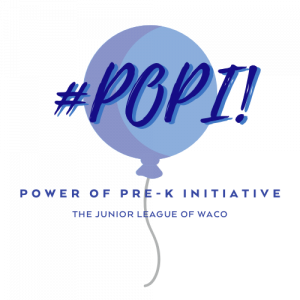 Five years ago, the Junior League of Waco identified early childhood education as the focus for our community programs. On April 19th – April 23rd, 2021, the Junior League of Waco will host its first-ever social media-based campaign! The Power of Pre-K Initiative, or #POPI, is a week-long awareness and fundraising campaign that harnesses the power of social media to illustrate the importance of Pre-Kindergarten and how the Waco community can support early childhood education.

For five consecutive days, members and advocates will participate in our digitally-based fundraiser by raising awareness and sparking conversations about the importance of Pre-Kindergarten and how the Junior League of Waco is actively supporting this mission.

Click here to give a donation to the Junior League of Waco.

It is with your generous support, JLW can continue to support the Power of Pre-K in McLennan County!

If you have any questions about our social media campaign, please contact springfundraiser@juniorleaguewaco.org.

The Junior League of Waco is an organization of women committed to promoting voluntarism, developing the potential of women, and improving our community through the effective action and leadership of trained volunteers. Its purpose is exclusively educational and charitable.

By continuing to use the site, you agree to the use of cookies. more information